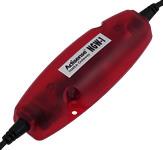 The Actisense™ NMEA 2000 to NMEA 0183 Gateway is the easiest way to link between a boats old and new data networks. The NGW-1 can convert NMEA 0183 data into NMEA 2000 data and vice-versa.

Using the advanced configuration software it is simple to set up which data items you want translated between the two buses.

The NGW-1 allows current NMEA 0183 equipment to be kept, or allows the latest NMEA 2000 equipment to be incorporated into the NMEA 0183 system. Once the single cable NMEA 2000 bus system has been installed, data from any node on the bus can be listened to by any other, including any NMEA 0183 instruments connected using an NGW-1.

The new Actisense NMEA Reader software utility can now be downloaded from this page. This utility allows the NGW-1 user to view and understand (in detail) the translated NMEA 0183 sentences output by an NGW-1 device directly, or via an Actisense USG-1.

The NMEA 2000 network acts like a bi-directional multiplexer, allowing all data sources to talk and listen to each other.